WHY I LIKE PROTONVPN: ProtonVPN is based in Switzerland and is most known for their e-mail service ProtonMail. They currently offer the safest free VPN services on the market. There is also support for TOR usage and P2P file sharing. I highly recommend ProtonVPN if you are intending to do some extensive online sharing. It goes without saying that Proton does not collect logs of any kind and is completely safe to use.

ProtonVPN is one of the safest VPNs.

I have found that their transparency and passion for privacy have left an impressive track record of good reviews around the web.

The few complaints I’ve seen are regarding customer support and download speeds.

However, those are a few years old and I have not personally faced a problem with either.

ProtonVPN is also Open Source, which is very rare for a VPN provider.

Further reading on the transparency of Proton can be found on their website here: https://protonvpn.com/blog/is-protonvpn-trustworthy/

Speed and servers of ProtonVPN

ProtonVPN currently has 809 servers in 50 countries with a capacity of 947 Gbps.

This number is always increasing, and they have added 2 countries since I last wrote about them.

The download speeds were tested on 5 different servers around the world with the VPN connected to the closest one.

These are the results:

These tests were performed with https://speedtest.net/.

As you can see, some servers are heaps faster than others.

But do not think that all American servers are as slow as the one we tested.

This was a blind test, picking a server at random and checking the speed.

To confirm this, I tried out another USA server at random (New York #30) and got the following speed:

ProtonVPN have done their due diligence and enforce a strict no-logs policy.

This means that your activity will never be logged while using ProtonVPN which is a strict requirement from VPNetic when recommending VPN services.

All network traffic is encrypted with AES-256, key exchange with 4096-bit RSA, and for message authentication, they use HMAC with SHA384.

If you’re not familiar with these concepts, then you can rest assured that they are facilitating the latest secure technology available.

Furthermore, ProtonVPN utilizes the IKEv2/IPSec and OpenVPN protocols which have been deemed the safest protocols available today. 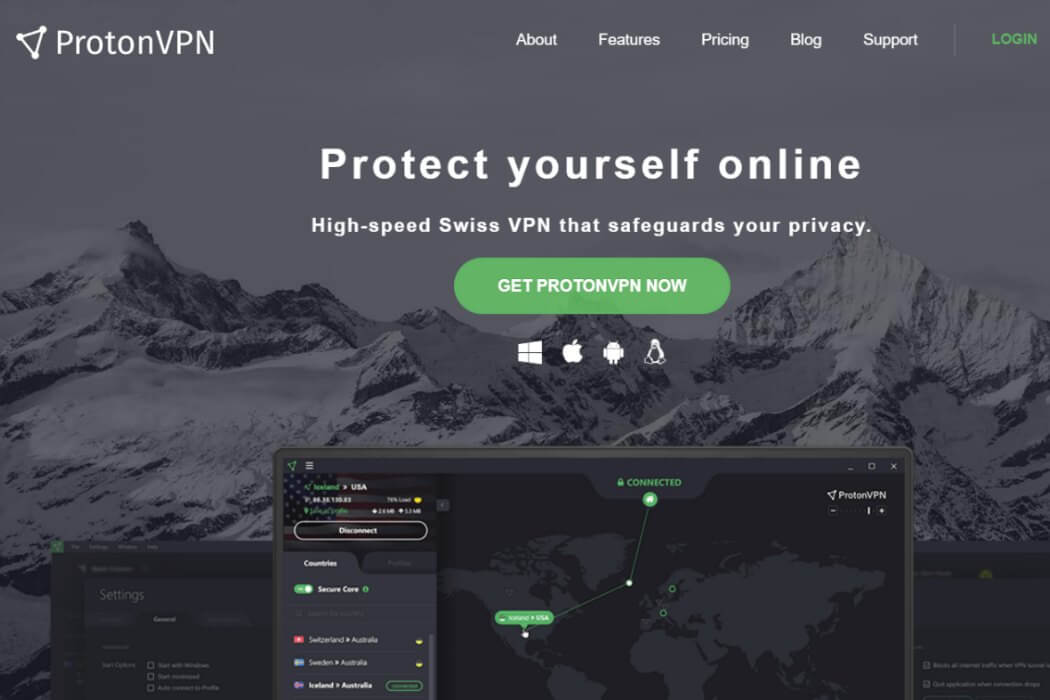 Transparency – Who is behind ProtonVPN?

ProtonVPN is a Swiss VPN run by the same company behind ProtonMail, Proton Technologies AG.

The team behind Proton Technologies first met at CERN and in 2014 they launched their secure e-mail service ProtonMail.

The birth of ProtonVPN became a reality in 2017 when the team realized that some exposed people like journalists needed an extra layer of security when using ProtonMail.

They launched their free version at the same time which I will dive deeper into below.

Proton Technologies has a long track record of fighting against internet censorship and privacy laws which they regularly post on their blog.

The CEO and founder of Proton is Dr. Andy Yen, who has over 8 years of experience in “distributing computing for demanding particle physics application”. He was previously a researcher at CERN, like many of his colleagues were.

The CTO of ProtonVPN is Samuele Kaplun, a theoretical computer scientist who spent 12 years at CERN building systems for high energy physics. Today he is the leader of the ProtonVPN team and is ultimately responsible for the product ProtonVPN.

ProtonVPN with Netflix, Hulu, and other streaming services

I was flawlessly able to register and watch Netflix and Hulu in 720p with ProtonVPN.

See here for a complete list of best VPN for Netflix.

Is ProtonVPN safe for torrenting?

ProtonVPN allows for P2P sharing on specifically marked Basic and Plus servers in the Netherlands, Singapore, Sweden, Iceland, and Switzerland and does not carry logs of your activity.

So, if you decide to download anything illegally from a torrent site and your government requests logs from Proton, they will simply not have anything to give them.

This combined with the sheer speed makes ProtonVPN one of the best VPNs for torrent use.

As with most popular VPN services, we detected no DNS leak while testing 5 different countries.

Their customer support is as good as you can expect from a VPN service. Support tickets get replies usually within 24 hours and they have a good knowledge base which can be found here: https://protonvpn.com/support/

Proton offers a free limited version of their VPN service. This has historically been VPNetic’s #1 choice of free VPN.

You get access to 3 countries: USA, Japan & The Netherlands with no logs being carried, 100% free of charge.

No advertisements, no speed or data limits, and full protection by Swiss privacy laws make ProtonVPN the best free VPN service we have ever stumbled upon.

The one downside to this is the lack of features that you typically get with a paid VPN plan.

P2P support, Secure Core servers, multiple devices, and TOR support are just a few of the features you get access to when you upgrade.

ProtonVPN offers a 30-day money-back guarantee. This is especially useful if you haven’t tried out their service before.

However, we find that many users are introduced to Proton through their free version first, and upgrade later when they have become familiar with it.

The most expensive alternative is paying monthly, as it usually is.

If you opt-in for 2 full years, then you will receive a 34% discount which will land your monthly cost at 7,48 USD.

They also support Bitcoin payment if you already have a free account that you can easily enable through the dashboard once you’re logged in.

But if you don’t already have a free account and wish to pay with Bitcoin you will have to contact their support and they will help you out.