The best VPNs are the ones that have a variety of locations all over the world along with stable speeds and privacy protection. This is important because you can choose which location to connect to depending on your needs at the time.

ExpressVPN, CyberGhost, and ProtonVPN are just some recommended VPNs out there Reddit by users across various VPN-related Subreddits with different prices for you to choose from. Be sure to do your research before choosing one!

WHY I LIKE NORDVPN: NordVPN has long been regarded as one of the strongest brands in cybersecurity. With one of the largest server offerings on my list and support for most, if not all operating systems, making NordVPN an obvious choice for many. They have 24/7 customer support if you need help getting started. Their app is one of the most well-designed apps I have ever used. NordVPN even accepts cryptocurrencies as payment for extra anonymity.

WHY I LIKE PROTONVPN: ProtonVPN is based in Switzerland and is most known for their e-mail service ProtonMail. They currently offer the safest free VPN services on the market. There is also support for TOR usage and P2P file sharing. I highly recommend ProtonVPN if you are intending to do some extensive online sharing. It goes without saying that Proton does not collect logs of any kind and is completely safe to use.

WHY I LIKE SURFSHARK: Surfshark VPN is perfect for those who want a cheap and reliable VPN that also has many extra features. "Camouflage Mode" hides your usage from your ISP, "Kill Switch" suspends your connection and protects your information if you temporarily lose Internet access, "MultiHop" to connect from multiple countries at the same time just to name a few. My favorite feature of Surfshark is "Whitelists" which allow the user to exclude specific apps and programs from the VPN connection.

WHY I LIKE CYBERGHOST: CyberGhost VPN is the first choice of many other cybersecurity experts, and the reason is clear; they have the most complete VPN service. An incredible number of extra features that are best suited for the more advanced users but also work flawlessly for every-day purposes like P2P-filesharing. Cyberghost VPN also has the longest stretching money-back guarantee at a full 45 days.

WHY I LIKE ATLAS VPN: Atlas VPN is one of the best new free VPN services. With the free version, you get unlimited data, no ads and zero logging. During my speed tests, Atlas VPN performed very well and could compete with mainstream services. Kill Switch, Ad-blocker, and P2P support all included with a regular subscription, which is incredibly cheap for such a robust service.

WHY I LIKE PRIVATEVPN: PrivateVPN is the strong underdog in the world of VPNs. With a shy number of servers, it is evident that they are focusing on quality over quantity. Overall, PrivateVPN is a very decent choice of VPN, especially if you had enough of the excessive advertising by some of the other more known brands in this list. Setting up the VPN requires extremely little intervention, and you can even pay with Bitcoin.

WHY I LIKE PIA VPN: PrivateInternetAccess is at the top of my streaming tests, which is a great combination with their easy-to-use UI, Open-Source software and built in adblocker. PIA is also perfect for those who want to be able to pay with PayPal which for some reason, many other VPN services do not support. 30-day money-back guarantee, multiple Netflix libraries, and extremely affordable are the three main selling points for this VPN service.

WHY I LIKE EXPRESSVPN: ExpressVPN is one of the fastest and most reliable VPN services. With the 30-day money-back guarantee, you will have a fair chance to see if you are happy with the service. They support almost every device and OS out there, and their 24/7 customer support is the best I have experienced among all the VPNs in this list. The only pitfall that ExpressVPN has is the price. It is double the price as some of the other services in this list. Despite that, I strongly believe ExpressVPN is one of the best VPN services you can get.

WHY I LIKE OVPN: OVPN is the best alternative for people who expect heavy security from their VPN provider. No other operator has the same level of physical security that OVPN has. All their servers operate without any type of storing media, which would otherwise log information. One selling point that really stands out, is their insurance. They go out of their way to protect their customers by having insurance so that when some government requests documents, they will have the resources needed to fight the claim in court.

WHY I LIKE HOTSPOT SHIELD: Protect your personal information from hackers, snoopers, and ISPs with the fastest free VPN of 2021. That is right, the crown for fastest free VPN has already been claimed by Hotspot Shield, supported by multiple speed tests around the web, including my own. While their premium VPN service is one of the more expensive ones, the free version is good enough for people who just cannot pay for a VPN service, but still value their online privacy.

ExpressVPN is a very fast VPN service with applications on all major platforms. It has servers in 96 countries, which means you can choose your preferred server without compromising speed. ExpressVPN has an “unlimited bandwidth” feature to make sure you get the most out of your experience

It is one of the fastest VPN services on earth, making it perfect for live-streaming sporting events, video chatting with friends overseas without lag, and more!

The VPN is available for Windows, Macs, iOS, Android, and Linux – meaning there’s no need to worry about compatibility issues. ExpressVPN also offers “Split Tunnelling” which allows you to create custom VPN chains with your choice of devices without sacrificing speed or security.

CyberGhost VPN is a popular VPN that has been around since 2011. It’s based in Romania and it has more than 7,500 servers in over 91 countries, including the United States and Canada. CyberGhost’s user interface is really appealing, and someone who doesn’t know how to use a VPN would find it easy to navigate.

They also have fast speeds and unlimited bandwidth, so watching videos or loading web pages won’t be an issue. There are some downsides of course: they do keep logs on some things such as email address (but not activity), the username (but no activity), and payment type (but not actual payment).

If you’re looking for a cheaper option then go with Private Internet Access because they too have unlimited bandwidth, fast speeds, and the ability to pay anonymously. 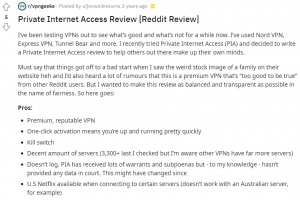 Private Internet Access is a great VPN that’s been around since 2010. It’s based in the United States and it has thousands of servers in over 78 countries, including Canada and the US. PIA has a user-friendly interface with a lot of settings for people who know what they’re doing and a limited amount of settings for those who don’t.

PIA is also great because they keep no logs and there’s unlimited bandwidth, speed, and server switching. The only downside with PIA is that it might be too user-friendly because the servers are owned by third parties who could theoretically snoop on your activity if they wanted to (although they don’t seem to).

ProtonVPN Service is a service that provides services at a very competitive price. They have a 30-day refund if you are not satisfied with the service and have no data logging for privacy purposes. The  ProtonVPN has over 1,432 servers in over 61 countries.

Their strong VPN Encryption is enabled on all their servers, with added security on Core Servers. It also offers 256-bit AES encryption, which is the gold standard for data transfer security. With this encryption, even if your internet service provider (ISP) has compromised security; there is still no chance of them reading your data.

The security of your personal data is paramount when choosing a VPN provider. A good way to check on who does not keep logs and provides strong encryption is to use ensure that they have a no-log policy, DNS leak protection, and important features like Kill Switch. Gladly, all these features are provided by ProtonVPN. 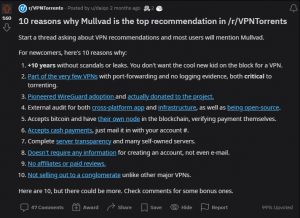 Mullvad VPN service is a well-known VPN service that has been around since 2008. The company runs as a no-log provider and also as an OpenVPN-based solution. It’s available for Windows, Linux, and macOS. Mullvad VPN service does not store any customer information and uses military-grade encryption to provide protection for your data.

For those who want to use the Mullvad VPN service but don’t want to pay the monthly fee, there is also a Mullvad VPN trial available for users who want to try before they buy. Mullvad has 760+ servers located in Sweden, Panama, the Netherlands, Iceland, Romania, Russia, and Hong Kong. It’s one of the best VPNs recommended by Reddit users.

In this blog post, I shared the best VPNs according to Reddit users. There are many VPNs out there, but some of the most recommended ones are ExpressVPN, ProtonVPN, Mullvad & Cyberghost. They’re all cost-effective, secure, and have a variety of locations across the world for you to choose from. Do your research on each one to see which is right for you!